The FlashForge Finder Lite is practically unchanged from its slightly pricier big brother. If you can put up with a lack of WiFi and USB then this is a bargain 3D printer and a perfect introduction to the hobby for younger users. 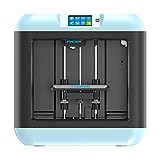 FlashForge Finder
Check Price
Price info Product prices and availability are accurate as of the date/time indicated and are subject to change. Any price and availability information displayed on Amazon.com at the time of purchase will apply to the purchase of this product. Prices exclude delivery.
Table Of Contents

The original FlashForge Finder has cemented itself as a favorite 3D printer for children and teens, both at home and in classrooms.

So what have FlashForge done to improve on the popular Finder? Actually, the only changes are minimal superficial changes that allow them to drop the price below the $300 mark.

The main change is that now you can’t use USB, ethernet, or Wifi to transfer your files to the Finder. The only data transfer method is SD-card, and you have to leave the SD-card in the printer while it is printing as there is no internal memory.

Other than that, the slightly garish red color has been swapped for some slightly more pastel colors including a yellow and pale blue option.

I’m sure there are people who will miss the WiFi option but personally I think that’s a fine compromise as long as it gets more people into 3D printing. Personally I always tend to use either the USB thumb drive or SD-card transfer options on my 3D printers as it’s far to easy for a network connection to fail and spoil a print.

The first thing to say about the FlashForge Finder Lite is that it looks very likely to appeal to kids. The brightly colored open-sided case of tough but well made chunky plastic is a welcome change from its more industrial and sleek looking competitors.

As in the previous model, the touch screen is clear and responsive and an ideal interface for younger users to quickly get to grips with.

The chunky plastic frame gives it a satisfyingly sturdy feel, the motors and drivetrain are mostly hidden away and whilst it looks quite futuristic it also just doesn’t look out of place sitting in a child’s bedroom or study.

On the front of the machine is a nice clear color touchscreen, overall the Flashforge Finder Lite looks decidedly unintimidating which is great for less tech-savvy folks.

A user manual is included on the SD-card that comes with the printer; however, when you first switch on the Finder the touch screen handily walks you through the initial setup.

This consists of leveling the print bed by telling you to screw the adjustment nuts fully down by hand and then one by one as it measures each corner it tells you to raise each nut until a beep informs you the correct height is reached. This is a really clever but simple system that turns what could be a frustrating process into a complete doddle.

Loading the filament was a little trickier as it requires a little more force than you might expect.

The Finder comes with its own FlashPrint software for preparing (slicing) models. I think it’s pretty good, the fully automated slicing and support generator work well and manual options such as temperature and printing speed are available for when you want to move to the next level of 3D printing.

Standard features like material usage estimates are included. Using the manual settings FlashPrint is much more advanced than the XZYware that comes with the DaVinci miniMaker and should give most teenagers enough freedom to create before they decide that 3D printing is their dream career and start begging you to buy a Lulzbot TAZ6…

FlashPrint also has a few gimmicks such as ‘2D to 3D’ which allows you to make an approximate 3D model from a 2D image, for example, you can turn a photo of your face into a lithophane style model, while this isn’t going to work perfectly it’s a fun enough exercise.

This is really a hassle-free 3D Printer. Using default settings the sample print should be completed in a little under an hour. Heat up time is fast, being able to remove the plate to apply blue tape is a dream. The original Finder was a surprisingly quiet machine and the Lite model is no different.

One of the simplest yet most useful features of this printer is the removable build plate! It’s crazy that this isn’t a feature on all consumer-oriented 3D printers. Being able to remove your parts from the build plate whilst it’s sat safely on your desk is so much easier than reaching inside the machine and it just feels like a better way for kids to see their builds removed from the printer with a gentle slide it creates a ‘wow’ moment rather than 15 minutes of frustration as you deal with scraping bits of tape in a confined space.

The failure rate of builds on this printer is also fantastic, very near zero for me after a couple of weeks use which is very impressive.

This is a PLA only 3D printer. The bed is completely unheated, which makes it much safer for younger users but does mean they are likely to outgrow it one day when they want to experiment.

However, PLA is a great material and it’s what the vast majority of us use on a daily basis. PLA is made from organic plant matter (usually corn or sugar starches) which means it doesn’t give any toxic fumes when it is heated.

Although the FlashForge Finder Lite is happy to accept other brands of PLA filament the onboard filament holder is a little smaller than standard and so if you do choose a different brand you will need to keep the spool holder away from the machine for example on a shelf to the side or above it, in fact, there are some cool spool holder designs available on Thingiverse so you can make your own!

The FlashForge Finder Lite makes 3D printing that bit more accessible to a host of people who want to be sure they’re spending their money on something reliable and safe for their family.

The small compromises FlashForge have made to make this model cheaper are acceptable and unlikely to inconvenience many users.

The Finder Lite is pretty much plug and play, and combined with excellent support from the manufacturer it’s the ideal choice if you want to give your family a hassle-free entry into the world of 3D printing. It also has enough flexibility that it will be a good few years before your skills grow beyond its abilities.

I also want to add that many owners have reported the customer service at FlashForge to be outstanding. With very prompt and helpful replies to customer queries received usually within just a few hours. This is especially important as you start to experiment with new filaments and more advanced slicing, things can go wrong so it’s comforting to know genuine help is an email away.