DLP Resin Printing Just Got Cheaper With the XYZprinting Nobel 1.0A

Its predecessor (without the A suffix) was the cheapest SLA 3D Printer ever available to home users. Unfortunately, it was just never able to overcome its teething problems.

However, XYZprinting has made a concerted effort to fix all these issues in the second generation model 1.0A. If they’ve succeeded, then this really will be a turning point in home SLA printing. 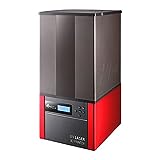 XYZprinting Nobel 1.0a SLA 3D Printer (for Dental & Jewelry)
Check Price
Price info Product prices and availability are accurate as of the date/time indicated and are subject to change. Any price and availability information displayed on Amazon.com at the time of purchase will apply to the purchase of this product. Prices exclude delivery.
Table Of Contents

Note: This is a new and improved version of the Nobel 1.0. The second generation Nobel 1.0A.

The first generation model was popular due to its crazy low price for a fully functioning SLA printer. However, there has never been unanimously positive feedback from users. Some people have great luck with the printer and think it’s fantastic value, while an equal amount of owners find it a frustrating experience to get consistently reliable prints.

The new second generation Nobel 1.0A has some improvements that should help rebalance those opinions. So far, owner feedback has been very positive.

It has an upgraded laser, improved from 300 to 130-micron accuracy. Faster printing speed. Improved software featuring improved visuals for easier slicing and with faster orientation, and build support generation.

Like the Form 2, the resin is now automatically checked and filled, making for a much less messy experience.

Like the previous model, the build volume is larger than the Form 2 at 5″ x 5″ x 7.8″. However, unless you have a specific need for larger builds, I wouldn’t let that stat sway you. Jewelry is generally more than small enough to fit in this space. And in most cases, you can simply split your part up to fit if you need to.

At the moment I don’t think there are enough models sold to confidently conclude this is a 100% reliable out of the box 3D Printer. However, if XYZ has made a step up in usability with this model then they surely have a winner at this price point. Whether you feel confident taking that risk is up to your budget and how much you like to take a chance! So far, owners have reported a very positive experience with the upgraded model.

Is This The Best Value For Money SLA Printer?

The Nobel 1.0A is currently the only worthy competitor to the Anycubic Photon on the market. The big selling point of the Nobel 1.0A is its incredibly low price for a resin 3D Printer.

Why is the Anycubic Photon Better than the Nobel 1.0A?

Firstly, it doesn’t quite print to the same level of detail as the Photon. You will notice build lines on parts. Fine detail can be missing. For example, small holes that create a pattern may end up being filled in. You would need to correct these by hand on the finished part.

Secondly, the original Nobel 1.0 suffered from usability issues. User opinion has been split pretty much 50/50 between those owners that have no issues and find it to be a reliable and easy to use 3D printer. And those who find it either inconsistent, unreliable or never manage to get it to work at all.

Thirdly, customer support from XYZ is not as proactive or helpful as Anycubic. There isn’t really much of an online community, and official help usually comes in the form of regurgitated owners manual rather than live problem fixing.

The Anycubic Photon has such a large and passionate following that it’s much easier to find help when you need it.

The new model seems to have fixed all the known issues. But as yet it’s too early to say with confidence it is as reliable and easy to use as the Form 2. I hope it does prove to be so as it will then become the bargain of the century!

Its predecessor (without the A suffix) was the cheapest SLA 3D Printer ever available to home users. Unfortunately, it was just never able to overcome its teething problems.

However, XYZprinting has made a concerted effort to fix all these issues in the second generation model 1.0A.

If they’ve succeeded, then this really will be a turning point in home SLA printing. However, with so little user feedback appearing, it’s just too early to make an informed judgment on reliability and consistency across models.