For its low price, the Sovol SV01 offers a lot, including a direct drive extruder. For 3D printing flexible materials like TPU then there aren’t many competing 3D printers available in this price range. The SV-01 builds on the proven Ender 3 design, with some well thought out improvements and extra features. All in all, this is an impressive 3D printer that offers fantastic bang for your buck. 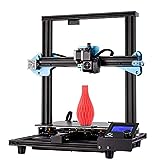 Sovol SV01 Upgraded 3D Printer 95% Pre-Assembled with Direct Drive Extruder Meanwell Power Supply Glass Plate & Built-in Thermal Runaway Protection 280x240x300mm
Check Price
Price info Product prices and availability are accurate as of the date/time indicated and are subject to change. Any price and availability information displayed on Amazon.com at the time of purchase will apply to the purchase of this product. Prices exclude delivery.

Sovol is known for its 3D printing accessories and filament but the SV01, launched in May 2019, is their first 3D printer.

To those in the know, the similarities to the popular Creality Ender 3 are obvious. The frame and control box are identical. However, what makes the SV01 most interesting is where it differs from the Ender 3, and indeed where it appears to greatly improve upon the Ender’s design.

Despite similarities to other 3D printers, the SV01 is loaded with additional features that make it stand out from the crowd. Let’s take a look at the most significant features.

The most significant feature on the SV01 is the direct drive extruder. Direct drives are a great benefit on 3D printers as they alleviate all of the issues seen with Bowden cables and allow you to print with soft and flexible filament materials like TPU and TPE.

The coated bed plate is uniquely permanently bonded to the heated bed which results in a very stable platform that requires much less calibration between prints.

The coating itself is similar to the Ultrabase coating seen on Anycubic 3D printers, and works in the same way, providing a superior gripping surface that negates the need for glue or hairspray while also making prints pop off with ease once they have cooled to room temperature.

Two Z-axis screws and stepper motors drive the vertical axis of the SV01, improving accuracy and precision, resulting in a specified Z-axis accuracy of 0.001mm.

Another area where the SV01 differs from the Ender 3 is that the 24V Meanwell power supply is neatly integrated underneath the printer with an aluminum cover over it, rather than being mounted precariously and unprotected on the outer frame. This protects both the printer and the user and looks more attractive. The cable routing and ATMega2560 motherboard are also under this cover, giving the printer a very neat appearance. Unlike other manufacturers, Sovol hasn’t cut corners with a cheap power supply. The Meanwell branded unit is a trustworthy brand which will deliver the power needed without cutting out or causing a safety hazard.

While the SV01 doesn’t have auto-leveling, Sovol has thoughtfully left space and appropriate mounting holes for a sensor if you should want to upgrade. As this is one of the most popular 3D printer upgrades, but not for everyone, it’s a good idea to not add to the printers price with a feature many people won’t want, while making it easy to upgrade for those that do want to.

So many 3D printers do not have this basic safety feature, so it’s great to see Sovol make this a selling point as it is so important. Thermal runaway protection ensures your 3D printer stops sending power to heating elements in the event of an error. This can prevent catastrophic overheating.

In the event of your filament running out too soon, the SV01 will detect this and pause your print so you can fit a new spool of filament and resume the print, saving you from failed print disaster!

In the event of a power outage, whether a tripped fuse or an accidental unplugging, the SV01 will simply ask you if you want to resume from where it stopped. Again, this is a print-saving feature that can easily save you from canning hours of printing.

If you want to print flexible materials like TPU then there aren’t many alternative 3D printers available without spending many hundreds of dollars more.

Making use of the Ender 3’s proven frame design makes sense as it has no fundamental issues. Adding a few bells and whistles makes it all the more appealing.

All in all, this is a great 3D printer that is a genuine threat to some more popular models.

You can find out more about the SV-01 on Sovol’s website.